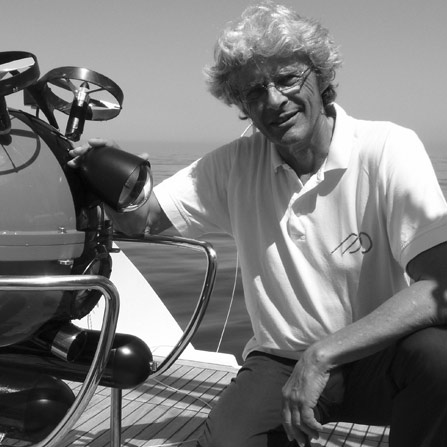 Engineer, Guido Gay took his doctoral degree at Politecnico of Milano in 1964. Particularly talented inventor he is designer and maker in several fields of technology, always having original, outside the box ideas. He started his activities in 1968 as entrepreneur of a start up company devoted to the design and manufacture of electronics measuring instruments.
Being a passionate sea lover and sailor he combined his passion for the sea with his talent as inventor and in the first years of the 70′s started to study and make the first remote-controlled underwater vehicles, fitting into history as a pioneer for this technique.
In 1979 Guido Gay founded GAYMARINE, an Italian based company, and ten years later IDROBOTICA in Switzerland, both companies dedicated to the design, development and  production of the now well known PLUTO family of underwater ROVs particularly suited for mine-clearing operations in the Military and for underwater research in general.  In 1990 Guido designed an original catamaran sail yacht  intended both for recreation and as a hosting station for the ROVs PLUTO.
After a long experience sailing the oceans around the world he focused in experimenting  new technologies for the exploration of the abyss.
In the deep Mediterranean sea bottom he found dozens of ancient roman wrecks and many modern wrecks including the WWII battleship ROMA flagship of the Italian Regia Marina.

To find the wreck of BATTLESHIP ROMA has been the challenge that has triggered the creation of new instrumentation that at the end, today, has obtained a result that has to be considered as cutting edge.