The DAEDALUS catamaran at first sight may resemble a luxury sailing yacht capable of taking a group of laid back guests across the oceans,  but in its spacious and comfortable quarters, it incorporates a package of very special equipment calling for unusual activities: it is a craft developed for exploring and discovering what is hidden in the Depths of the seas.

Advanced non conventional design concepts and accurate construction assure  speed, stability, safety and comfort, but in addition DAEDALUS  is fitted with a set of instrumentation of original concept (meaning that nothing has been purchased off the shelf, all has been custom designed and built to achieve the best performance and simplicity at minimal cost, therefore not comparable to anything existing today):

- A long range SIDE SCAN SONAR.
While navigating at speeds of 5 to 6 knots it records a sea bed map on a 1000 m wide corridor, in depths exceeding 1000 m and it can detect the presence of objects such as wrecks even if rather small in size. 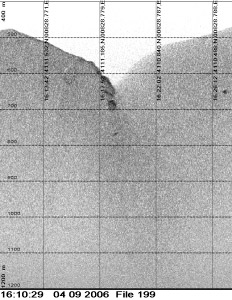 In the sonar map shown here a black dot appears on the right side. This contact investigated and identified by PLUTO PALLA has resulted to be a sunk ancient roman shipload, a heep af amphorae at a depth of about 500 m

- A system for DYNAMIC POSITIONING (just like the largest oceanographic research vessels) is able of keeping stationary position in the middle of the seas without anchoring, automatically computer controlled so that no human interaction needs to be involved.

In the effort to better highlight our advantages at performing high depth surveys, DAEDALUS has been fitted with our hull mounted long range sonar capable of offering an impressive mapping speed 5 to 10 times greater than conventional towed side scan sonars. 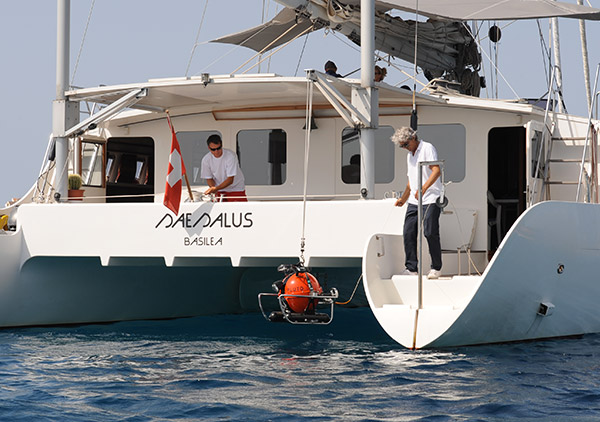 Not forgetting to mention the ease of deploying the light and maneuverable PLUTO PALLA capable of relocating the sonar contact by means of its own navigation sonar. PLUTO PALLA can rapidly approach the contact, identify it and if required thoroughly inspect it.

An example in numbers: DAEDALUS sonar sweeps more than 200 square km per day and PLUTO PALLA can identify 10 contacts per day down to 500 m depth.