In 2011, under recommendations of the Italian  Institute of Geophysics and Volcanology (INGV),  the PLUTO PALLA aboard DAEDALUS performed a series of dives  on the summit of Mount MARSILI.

The MARSILI seamount is a relief of the seabed, located approximately halfway between the Aeolian Islands and Naples, elevating approximately 2000 m from the sea floor with the peak located at a depth of 500 meters.

It is a submerged volcano, similar to the nearby Island of Vulcano in the Aeolian archipelago, from which sulphurous fumaroles and hot water springs are released.  It is a place which would deserve scientific monitoring in view of earthquake prediction.

Paromola Cuvier crab with hydroids on the head

Marsili is a submarine volcano located in the southern Tyrrhenian Sea, belonging to the  Aeolian islands arc. It is located approximately 140 km north of Sicily and about 150 km west of Calabria. The Marsili seamount is the largest underwater volcano in Europe. It is approximately 70 km long, 30 wide, and raises up from the abyssal plain of approximately 3000m.  The volcano ridge is placed at a depth of 495 m. The volcano is set on an existing ridge structure; the formation process of this volcano is associated to the opening of a back-arc basin (the Marsili Basin). The latter is tied, from a geodynamic point of view, to the Apennine subduction-Magrebine system which from Oligocene retreats westward triggering an extensional tectonics with formations of back-arc basins, some of which are characterized by the presence of oceanic crust.
The Marsili basin is the youngest back-arc basin of the southern Tyrrhenian Sea. The opening of the basin occurred approximately 2 million years ago, and the process of extension and new oceanic crust formation persisted for about 1 million years; at a later stage, on the top structure of the oceanic ridge, the central Marsili volcano begun to take shape.
The structure began to take shape approximately 1 million years ago through basaltic lava flows evolving, in the last stages, into andesitic  composition (circa 100,000 years ago). Recent discoveries, evidenced deposits of tephra, caused by explosive activity occurred in geologically recent age (5000 years ago)thus rejuvenating the latter stages of eruptive activity of the volcano. Recent studies of the magma fractional crystallization processes of Marsili indicate the presence of an active magma chamber at about 3 km below the crest of the volcano.
The volcano, in its superficial section,  has an extensive hydrothermal alteration confined to the ridge area (495 m). In the altered area extinguished hydrothermal vents formed at high and at low temperature are well visible.  The alteration zone has a very interesting economic value, due to the presence of hydrothermalism (alteration of the crust through circulation of hot fluids)  associated deposits, characterized by the presence of minerals and precious metals such as Barite, Pyrite, Galena, including gold, silver, cobalt and nickel.

In 2011, with the cooperation of Dr. Guido Gay, an exploring expedition on the Marsili ridge was conducted. Thanks to the PLUTO PALLA ROV, very high quality videos and images were captured documenting the presence of hydrothermal structures which had not been  previously census. 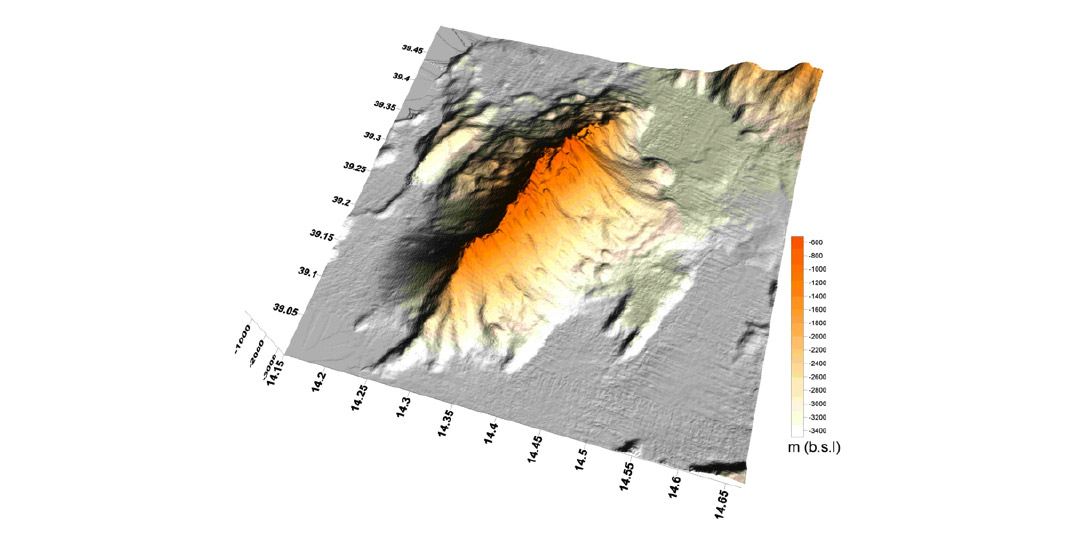