The SINKING OF SS TRANSYLVANIA

With more than 3,000 passengers on board, the British ship Transylvania was torpedoed by the German submarine U-63 during the First World War, just off the island of Bergeggi. Ninety-four years later, thanks to innovative new technology, the Carabinieri from Genoa have been able to track down this relic, resting at over 600 metres below sea level. 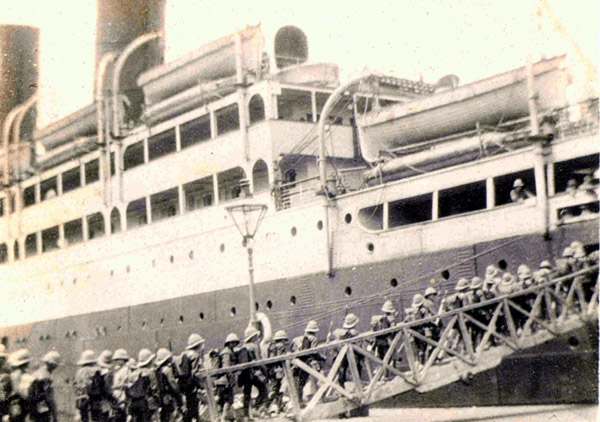 Lamenting trumpet sounds fill the ancient abbey of Santa Caterina in Finalborgo. Onstage stand the Italian, British, Japanese and German representatives, shadowed by the twilight.
They are commemorating the 1917 sinking of the SS Transylvania. Joined by a large audience, together they remember the tragedy that claimed 412 lives. Today is also about remembering the 2003 terror attack in Nassyria, when Daniele Ghione from Finale Ligure was killed in action. It is a moment of overwhelming emotion, and is only enhanced by the accompaniment of the heart-rending melody Silenzio.
On that fateful day on 4th May 1917, 2,860 British soldiers, 200 officers and 60 Red Cross nurses were travelling on board the Transylvania, heading towards Alexandria in Egypt from Marseille.
Like the Titanic, Transylvania belonged to the notorious, oceanline Reederei Cunard, which still exists today. The ship made its maiden voyage from Liverpool to New York in November 1914, but just one year later it was taken over by the British government for war purposes. The luxury steamboat - 167 metres long and weighing around 15,000 tons - was equipped with all the latest technology, including the telegraph. But it failed to help the SS Transylvania.
Little did the crew, or their Japanese escorts - the Matsu and Sakaki - know, that on this sunny, blustery May day, the Commander of the German 64 metre submarine U-63 was executing a carefully planned war strategy - to sink all of the ships at sea.
At 10am, near the Island of Bergeggi in front of Savona, a torpedo struck the engine room of the Transylvania. The Matsu came alongside and began to take troops on board, while the Sakaki circled to force the submarine to remain submerged.
Twenty minutes later, a second torpedo was seen heading straight for the Matsu, but it managed to manoeuvre out of harms way. Instead, the torpedo struck the Transylvania, a second blow that sank the ship immediately. Ten crew members, 29 army officers, and 373 soldiers perished.
In a letter to his mother, one British soldier wrote: "When the first torpedo hit us, most were on deck instead of in the engine room, thank God. We were told we had time to leave the ship on the lifeboats because it would sink in three hours, at the earliest."
But the gravity of the situation was greatly underestimated. Within 40 minutes of the first hit, the Transylvania could no longer be seen on the water.

Buried in Savona
During the first stage of the disaster, 60 Red Cross nurses were able to disembark. "Women left the ship first, as used to be the tradition," commented lawyer and organiser of the event in Finalborgo, Luca Battaglieri. Among those who lost their lives was the ship's Captain, Brennell. North of the shipwreck, in Savona, 89 bodies were retrieved and buried in a small cemetery called Zinola. Further victims were discovered in France, Monaco and Spain. Out of the 85 Commonwealth WWI graves at the cemetery in Savona, 83 of them are victims of the Translyvania tragedy.
Amazingly enough however, 2,708 passengers did survive, the majority saved by Japanese lifeboats. Ligurian fisherman, who had seen the attack from the shore, also immediately jumped into their boats and braved strong winds to save as many lives as possible. With injured, bloody hands, they headed towards the harbours of Noli and Finale Ligure.
An enormous wave of solidarity swept over the nation on 4th May 1917. In the overcrowded hospitals in the area, those who had been injured were housed; the Ligurian habitants opened their doors and welcomed in the British despite their poor financial conditions. The local monasteries also warmly welcomed victims. Language difficulties didn't prevent close friendships developing - at the time a number of Ligurian inhabitants had never come face to face with a foreigner.
During the 1930s, Great Britain was described as being the enemy, but these political decisions couldn't break the close bonds that had formed during the tragedy.
Soon after the disaster, the surviving soldiers were transported to Marseille. Along the way, they were given a hearty welcome and were greeted at every passing train station, especially in Alassio and Bordighera - two powerful, former British communities. Sadly, many of those who had escaped the tragedy in the Ligurian sea then died on the Palestine frontline.

Even today, strong emotions are palpable. The experiences and stories from the 1917 tragedy are passed down the generations and have become a myth.

Located in 2011
In October 2011, the remains of the sunken ship were discovered near the Ligurian coast. For years, the Carabinieri had been examining eye witness reports, trying to determine the location of the disaster.

Diver units within the Carabinieri of Genoa finally discovered the shipwreck 630 metres deep with the help of a special robot; it was not far from the Island of Bergeggi. This discovery would not have been possible without the use of the 'Pluto Palla' scanning device, manufactured by engineer Guido Gay. It was able to reveal that the ship had dramatically split into two parts, now laying 150 metres apart on the seabed. The discovery also resurfaced the legend of the Transylvania. And now, where once raged death and destruction, is a place of new life. The relic has become home to rare, white coral reefs.