CHRONICLE of the sinking

On September 9th, 1943, at 12.34 Naval Units were preparing to enter the waters adjacent to the island of “Maddalena” and dock. Around 14.45, following a series of maneuvers, the fleet received telegraphic communication from the Chief of Staff in Rome, communicating the fall of the island to the hands of the Germans. The fleet commander in chief, Admiral Carlo Bergamini, quickly decided to reverse the route and head towards the Gulf of Asinara. At 15.10 a formation of 15 German Dornier 217 heading towards the fleet were sighted. Following the air raid alarm, the first few rounds of anti-aircraft were shot from the ships. 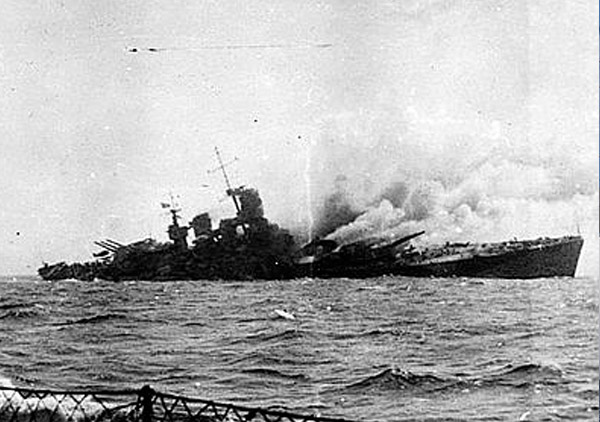 Around 15.36, the first bomb dropped from the German planes fell near the stern of battleship ITALIA lifting a huge wall of water. At 15.50 a bomb struck the port side of the Roma, causing it to drastically slowdown. Shortly after, a second bomb centered the battleship causing the explosion of the bow magazine. The deflagration generated a large fire between the bow towers, the bridge and the bow funnel. Gradually the ship broke in two pieces and slowly sank.

In all, 1353 men perished, amongst them Admiral Carlo Bergamini. The command of what was left of the fleet was assumed by the highest-ranking officer, Admiral Romeo Oliva, who ordered to head for Malta. It was only later that additional naval units were sent to recover the survivors of the Roma and headed towards Port Mahón (Spain) where they were interned until the end of the conflict.

THE BOMBS: The 15 twin-engine Dornier 217 KII bombers each carried an FX-1400 type bomb. The bombs were the latest introduction to the German arsenal and were fitted with an innovative radio control system. The FX-1400 had a high penetration capacity, four orienting wings, a rocket engine and a tail in the vicinity of which the remote control was placed. The bomb measured over three meters (3.3 m) and carried an explosive load of 300 kg.